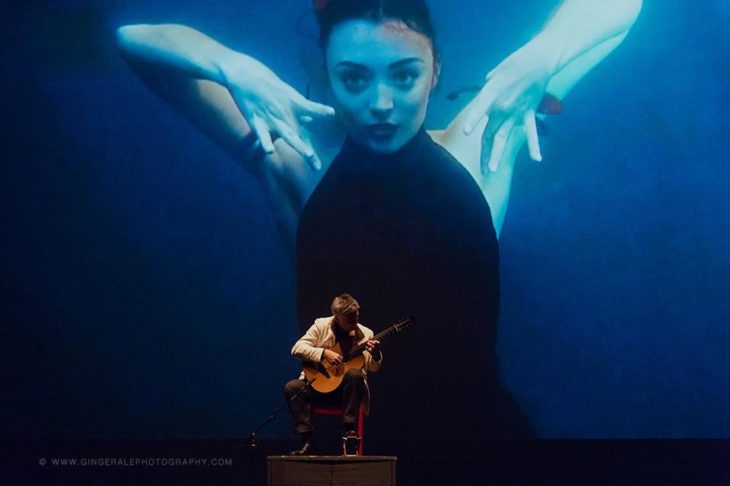 A MAN SITS on a chair on a small rug in the centre of a big stage. There is a little footstool on which he rests one foot. His body embraces a guitar in the manner of Spanish practitioners for hundreds of years. This is James Grace, arguably South Africa’s most well loved and skilled guitarist, and he’s not alone on stage for long: Recuerdos (Memories) is a gorgeous collaboration between Grace and the women of Carli Spanish Dance Productions.

It is here that you experience the well-known music of Isaac Albéniz (1860-1909) and Joaquín Rodrigo (1901-1999), but the programme is not just focused on the popular tunes. It’s replete with a whopping 14 pieces drawing from Spanish composers who have slipped into popular reception and those who have not. But that’s not all you get: interfaced with the astonishing underwater photography of Ilse Moore, the experience of this show lends itself to an aesthetic which makes you think of old traditions of painting where the drapery had a presence of its own. It’s an interesting touch to the aesthetic of the show, but it is not consistently successful. As the show begins, the videographic backdrop is glittery and abstract. It becomes distracting and you cast your eye from it. But as the work unfolds, and you get a more tactile context of these mysterious underwater shots, you’re hooked and transfixed.

The heavy complexity of the women’s skirts in conjunction with their bodies has an engaging presence of its own, and this is echoed in the dancing onstage. With their expressive wrists, their severe facial expressions, their stamping shoes and the trains of their skirts which have an unstoppable momentum of their own, these dancers are mesmerising. Indeed, the grammar and vocabulary of the choreography conjures up a storm of formal Spanish dance protocol blended with a touch of utter magic.

And then, there’s Carli Olivier. She’s the chief dancer in this six-strong troupe, and her presence is authoritative and simply magnificent. She holds the kernel of the potency of each choreographed phrase with certainty and frankness. And you struggle to pull your eyes from her.

The show is rooted, however, in words. From the get-go, you can see that Grace is not a natural speaker: he’s more comfortable with the instrument pressed close to his heart doing the talking. But the words he offers are succinct and interesting, lending both a sense of vulnerability to the show and great insights into the history of Spanish guitar music.

The show tends to be a little soporific at its tail end. And this may have to do with its gentleness and repetitive qualities as well as its length, but it’s an experience that will leave you with a spring in your step and a little enhanced courage to face the rest of the week. Recuerdos is an extremely civilised way to spend a Friday or a Saturday or a Sunday evening.